Monday Postcard #104 – When Everything Looks Easy

Fashion, textiles and Asia – our first thoughts are probably mass production, factories in China or Bangladesh, unhealthy and unethical working conditions fuelling our hunger for fast fashion. At Pelagona, I look for different ways of production and sourcing – I like to call it “slow fashion” or “slow products”. In the course of my product hunt for the store, I discovered Studio Naenna, in Chiang Mai, Thailand.

Chiang Mai is famous for its temples, cultural heritage, the odd Yogi attempting to find themselves and coffee. What most people do not know about the city in Thailand’s North, is its rich heritage in weaving, textile production and dyes. Studio Naenna’s mission is to not only preserve this heritage but to also take it into the future.

Founded in the late 1980s by Patricia Cheesman, Studio Naenna offers fabrics such as natural silk, cotton and intricate weavings as well as apparel and accessories. We could actually call it a “from farm to home”-concept, as every step of the process is done by Studio Naenna and its associated weavers – from the growing of the plants, to producing natural dyes, to dying, weaving and promoting the products.

One of their fields of expertise is indigo, a natural dye with a characteristic dark blue colour. The natural indigo is made from a tropical plant. However, as it is labour intensive and, hence, expensive, it has been substituted by the cheaper synthetic indigo in the industry. These synthetic dyes not only pose serious health risks for the people who make the products but also the consumers wearing them. Moreover, they are detrimental to our environment. Therefore, in addition to the in-house production, Studio Naenna also educates the public about natural indigo production.

When I arrived at Studio Naenna’s main gallery in Chiang Mai’s North, Lamorna Cheesman, the manager, was already waiting for me. She had just come back from harvesting indigo plants with the women who work at the studio. She was wearing a beautiful top with different shades of blue and jewellery made at the studio. When you hear Lamorna’s personal story, it may sound like in an adventurous novel.

Her mother Patricia had taken the family from Laos to Australia and then to Thailand, where she founded Studio Naenna in 1988. Patricia had a formal education in ceramics but discovered her passion for Southeast Asian fabrics while she lived in Laos. She educated herself about local textiles, did research and started documenting fabrics.

Patricia was also somebody who we would now call a “street style expert”: she interviewed locals about what they wore, why they wore the outfits and where the garments came from. She purchased some items, as she wanted to support the local weavers. But she soon realised that she wanted to create a bigger impact: as a facilitator of keeping the craft and art alive and preserve culture. She also wanted to ensure that the weavers were paid fair prices.

In the late eighties and early nineties, tourism in Chiang Mai was very different from today: American and Australian tourists visited in groups and Patricia invited them to her house to educate them about textiles. That is where the business really started – it was in the garage and Patricia saw that this is a business. She could give value by educating the consumer: Why is a certain product significant? Why does it take months to make? Moreover, she could give the right price label tonensure fair payment of the weavers.

Patricia created a market for products from North-Eastern Thailand and also connected with interior designers and companies overseas who sourced handmade silk. Her awareness in toxicity in chemical dyes rose, as she could see the effects in the region. Due to the lack of education about synthetic dyes, villages were contaminated by their use and exposed to health risks. She connected various stakeholders – the weavers, local communities, the university –  to find solutions. Furthermore, she brought some logic into the dying process – which had never been formalised and a lot of knowledge had been lost.

Leaving Home and Earning a Sense of Pride

Lamorna grew up with her mother’s various projects. But for a long time, she did not realise that she was part of something special. For her, this was just normal. She was a young girl whose beautiful red hair always made her stand out. Even though she grew up speaking and writing Thai, went to a local school and had local friends, she felt like a foreigner.

“I just wanted to get away to somewhere I was normal and didn’t stand out.”

Hence, she decided to continue her studies in Australia.

In the early 2000s the internet revolutionised the travel industry and the tour buses reduced. “It was a good development. The way people travel changed, especially the Western market.”, Lamorna says. Her mother had reached a point where she had a vast amount of information about textiles and wanted to publish a book with her own research. She also had stopped the big export orders. Her mother asked her to return to Chiang Mai to take over the management of the studio so that she could focus on her book.

While abroad, Lamorna found a sense of pride in the studio and in what her mother had started. When she was back in Chiang Mai, she was able to explore designing garments for the first time. “It just clicked. It gave me a sense of growth to share what I know and give value to people.”, Lamorna told me with an excited smile.

Customers reached out to inform her that products lasted for years. As they finally had worn out, they wanted something new. She realised that she was part of something really powerful.

The last piece of the puzzle to find her own mission was a course in fashion manufacturing. It opened Lamorna’s eyes about what factories were doing – how to make products cheaper, how to start manufacturing in China, etc. “I didn’t identify with this at all.”

Business and Marketing Strategies which Consider the Weavers

Lamorna emphasizes that Studio Naenna did not want to set up a factory situation where the weavers have to leave their communities to work for them.

“First of all, because weavers are mainly women. They are not just weavers – they are mothers, daughters, cleaners, cooks, community leaders, famers. They help each other with the harvesting. They support each other. There is so much more to their lives than just making money from weaving. They are able to make an income when they choose to, with in their own time. We have to accept that. If we are working on an order, it is our responsibility to plan that into the time schedule. It is not as easy as saying 80 metres will be woven within 80 days. We also communicate this to our customers. Furthermore, it is important for us to show the weavers that they are important and appreciated.”

When Lamorna started working at Studio Naenna, there was only one location at the main gallery. Her first task was to increase the capacity in marketing and sales. In 2005 their shop “Adorn by Studio Naenna” opened at Nimmanhaemin Road – which by now has turned into one of Chiang Mai’s hippest areas. Furthermore, she tries to cooperate with other initiatives to increase awareness and hosts regular workshops to educate the public about weaving.

Lamorna does agree that tourism can have positive effects, provided it does not disrupt the daily lives of the weavers and it is not the sole income stream. If the income made from tourism overtakes the daily income of the community, it creates a negative impact. “The locals will stop what they are doing to make money. They might even buy products they do not have from the market. What if the buses stop coming? There is no income, there is no product. The young people are not exposed to their mothers or others who weave and the craft is lost.”, Lamorna explains.

When we talked about sustainability in fashion, Lamorna mentioned that she does see a major shift in the mindset of consumers.

Her mission at Studio Naenna is to produce items which are made to last and which you can wear and love for a very long time. At the same time, Lamorna emphasises the role of the consumer:

“Change can only happen mainly by the consumer. The companies which cause the pollution and earn money on the backs of other people will suffer if the consumers refuse to buy their products.”

A challenge for the studio is the age of the weavers. Young Thais are not interested in learning the craft anymore. This is partly due to the current education system which is academically demanding, leaving no time to do anything fun or creative. Learning about crafts and heritage is not encouraged. Even if there are subjects such as crafts, the students learn Western crafts like knitting instead of traditional local crafts.

Therefore, Lamorna wants to dedicate resources to travel and find more weaving groups to collaborate with or identify and train other weavers. She also tries to foster the environment with smaller projects such as embroideries, which do not need a big loom and enable the women to earnan extra income. Thai society has started to appreciate the traditional crafts. “But maybe it is too late.”, Lamorna tried to smile but I could sense the frustration.

Saeng, one of the Karen weavers working full-time at Studio Naenna and also made Pelagona’s beautiful table runners, takes yarns back to her village where both young and old women work on back-strap looms to create these fabrics. In that village, a positive development happened when the head of the local school recognized that crafts are an important part of their cultural identity: She included it in the curriculum of the school. Without Studio Naenna, the craft of this village would have probably died out by now. Maybe it is not too late after all?

Pelagona now offers products by Studio Naenna on our store. Check out the beautiful items!

Lamorna Cheesman spent most of her childhood in Chiang Mai. She studied in Thailand and Australia. In 2001, she took over the management of Studio Naenna which was founded by her mother Patricia. Studio Naenna is a community of women weavers, embroiderers, designers and support staff based in Chiang Mai, Thailand. Its mission is to preserve local traditions, crafts and knowledge while at the same time empowering women.

Top 20 Things to Do in Bangkok

My Favourite Coffee Places in Bangkok 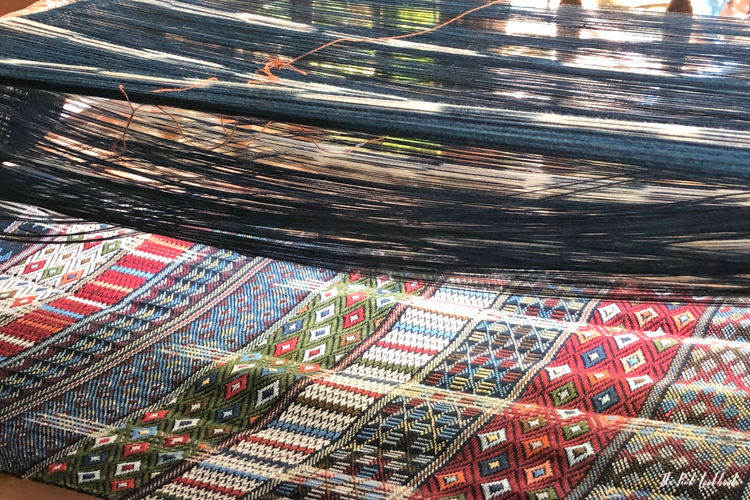 All information as of the date of publishing/updating and based on the personal visit of Elisabeth Steiger and the information provided at the location and the official websites of Studio Naenna. We cannot accept responsibility for the correctness or completeness of the data, or for ensuring that it is up to date. All recommendations are based on the personal experience of Elisabeth Steiger, no fees were received by the recommended places above.