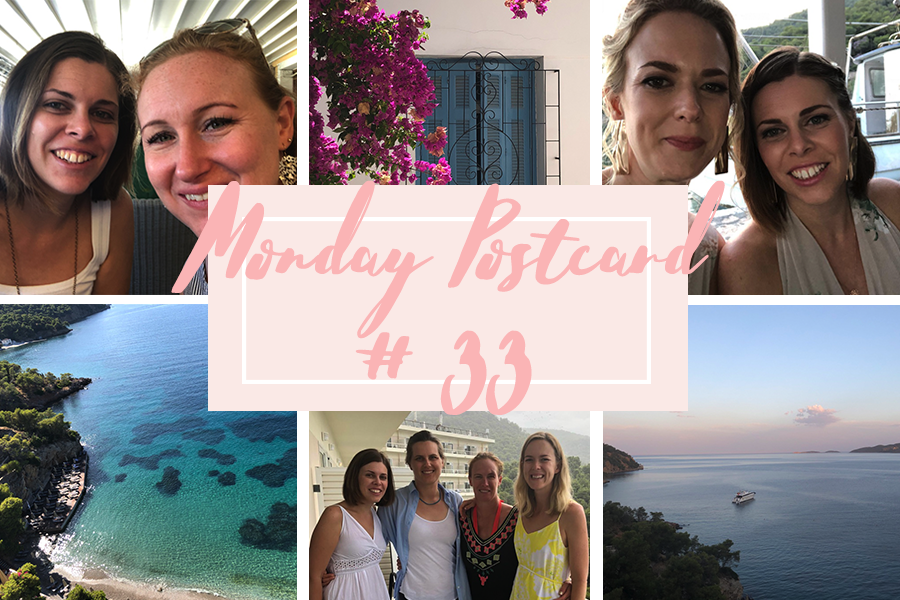 This week’s Monday Postcard had to be published on Tuesday because I am still feeling the after effects of my long-weekend in Greece where we celebrated the wedding of my friends Olivia and Shenton. It felt like a big school reunion because I saw so many of my friends again who I have not seen in years. And I had really interesting talks with my girlfriends about their careers and how their values and dreams changed over time.

When I started my business studies, I had a pin board above my desk with things which motivated me to keep studying: the Chanel 2.55 bag, a Porsche, an Aston Martin, pictures of exotic travel destinations. I wanted to have reached a higher position within a multinational company and afford all these things by my 30th birthday. These were my goals, most of them only of materialistic value. When I look at my post-30th achievements and goals, only the travels have remained. Even when I was in a position to afford the designer bags, I ended up not buying them and saved the money for travels or to invest in my own business. My values have changed and I realized that so had those of my firends.

It probably depends on your university course, but during my business studies we were conditioned to success in a monetary dimension. (Measuring success in terms of capital is probably due to the nature of studying business.) We were told to aim for a six-figure starting salary, for being promoted at least every two years or change jobs and to sacrifice everything for the sake of our careers – which included relationships (especially as a woman), friends, and, first and foremost, our freedom. My generation (which was just at the start of what we now call the Millenials) was kind of obeying the older generations and we still believed the myth of jobs purely serving the purpose of making money. Jobs are not supposed to be fun. Our parents still lived through the aftermaths of the second world war. They did not have the luxuries we had and we were told to keep those standards. However, you could feel that something was changing.

In the past months, I had conversations with (mostly) women but also men about our career goals and how they changed. All of us had made it to the top with high salaries and responsibility. But for some reason our value system seems to have changed. Last weekend a friend of mine who works for a multinational company in Australia told me she is willing to take a pay-cut to be able to work less. Our long weekend in Greece was her first holidays in three years. Another friend is considering moving back from Asia to Europe, even though it would result in cutting her salary by half. But she is willing to take this pay cut to improve her quality of life. All of these women can afford the bags, the cars and the travels. But I see that materialistic goals have become less and less important. And even though the travels would not be a problem money-wise, time-wise their jobs do not allow a lot of time off.

Monday Postcard #187 – Jumping in at the Deep End

What has become important to me is time. Time with my family, my friends and time for myself. Even though I still aim for a certain lifestyle which goes hand in hand with what we call a “good income”, I have arrived at a point where I know that a shit job will always stay a shit job even though it might pay for a Chanel bag. We often talk about the concept of work-life balance. But you know what? I realised that this is most of the time a topic for people who are really unhappy in their jobs. My second goal in my thirties is to build a life around a profession I enjoy doing (at least 70% of the time, there are always tasks we dread doing). A profession which allows me to travel, to have time for the people who matter to me and to grow professionally and personally.

What about you? What are the things which motivate you? Have they changed over time?

Monday Postcard #190 – What I Learned from Moving on My Own