If you follow me on Instagram, you may have seen my shooting at Vienna International airport with photographer Robert Becksteiner.

Robert and I have known each other since we were kids and he was – and still is – also one of my main advisors when I started out in tech. He is one of those people who always juggle multiple projects at the same time – ranging from all things IT-related, photography, renovating houses and being a dad. Every time we catch up, something new is going on. Therefore, I was not really surprised when I called me in March about a project for which he needed my help.

“I need a model for a photo shoot.”, I started laughing and said that I am sure that he has enough models in his circle. Why would he need me? “Well, it is a special kind of shoot. It is for a competition which aims at telling stories of women who inspire others, especially young girls, to go for their dreams. And I had to think of you – you travel, you moved abroad, started your business abroad.” I was extremely flattered. But at the same time I had my doubts. “You know that I am the worst poser in the world.” But Robert assured me we would make things work.

We started the research – the picture should be a portrait telling my personal story. As we wanted to show the importance of travel for me, we decided to shoot at the airport. Robert took care of the logistics to get a shooting license at Vienna airport. We initially wanted to shoot inside a plane, Austrian Airlines unfortunately was quite slow and maybe not interested to collaborate. (To be fair, we had to shoot during the Easter Week and it was at short notice.) However, the people at Vienna International Airport were really helpful and organised everything for us even during this busy Easter Week.

Meanwhile I did research about settings and poses. I analysed the accounts of travel and lifestyle bloggers on Instagram, went through magazines and Pinterest. I then put together a collection of pictures – just like a moodboard – to inspire us. I still was worried about me posing in front of the camera. Honestly, I feel really uncomfortable. Being in front of a camera is an artificial situation for me. I am not like the typical millennial – or even Gen Z – who knows their best angles and the tricks to look good in front of the camera. I always say I look like a little pig because I tend to have this unflattering childish smile on pictures. 😀

The day before the shooting my cousin Charlotte and I picked the outfit – I was supposed to look like I was just off to board a plane. Hence, we opted for a simple combo: a white T-shirt, jeans, sneakers, a coat. In addition, I packed props such as suitcases and my passport.

Robert and I met in the morning of Easter Saturday. We registered with the airport authorities and then went up to the surveillance deck. I hoped it would be empty because I felt weird about people watching us shoot. However, because of the beautiful weather other photographers came to shoot as well…

The first pictures were terrible. I had no idea how to pose, how to stand and show my best angles. I did not even know which angles were the best for me before that day. I am usually the one behind the camera giving instructions. I do not have to care about my angles. And I also worried about people watching us. When we went through the first 20 pictures I started laughing, I looked like in the photos for the yearbook. But Robert stayed calm and gave me some tips. We tried different angles. But somehow I still thought it looked terrible. I almost wanted to stop doing it.

But we knew we needed at least one good picture for Robert’s competition. I pulled myself together and then we had the perfect pose – with good light, the right angles. I even forgot about who was around us. We tweaked it a bit – on a side note: we took about 30 pictures of one pose. And as soon as I saw the positive results, my confidence grew. We then moved on to other poses – walking, watching the planes and I even managed to strike some poses without any instructions.

Before this shooting, I was well aware that there is a lot of work behind the “Instagram-virtual-reality”. When I gave instructions to models, I just fired away and expected them to get it. I was fortunate to have worked with people who immediately got what I was talking about. But after a day being in front of the camera myself taught me that it is very often not as easy as we assume. Being if front of the camera is hard work. I will definitely take those learnings and apply them during the next shootings.

In the meanwhile, I may even have the picture we have chosen printed and framed. What do you think? 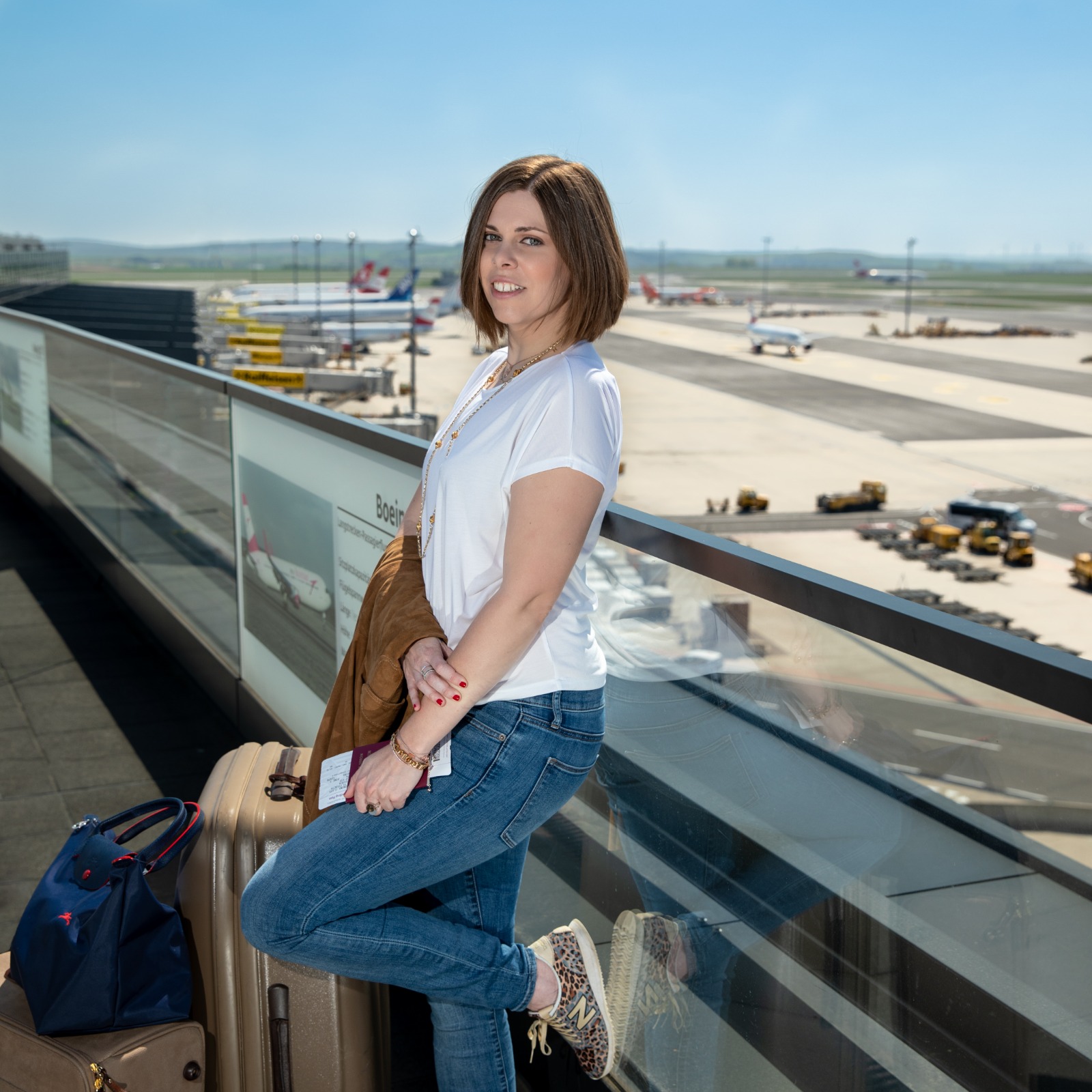 Special thanks to Robert Becksteiner for being the most patient photographer. You can book him directly on his website by the way. He does portraits, weddings, architecture, landscape and animal shootings. And he owns a drone (about which I am really jealous…). I would also like to thank Vienna International Airport and its staff for allowing us to shoot there.