How to Run a Business on a Small Budget

Even though Luang Prabang may not rank high on the list of the most famous travel destinations, the small town in Laos is definitely a gem. Directly located at the Mekong, it offers views of the river surrounded by the mountains. The city’s architecture is a testimony of the French protectorate. My personal highlight was Kuang Si Waterfall, which is just an hour’s drive from the city centre. Definitely put this on your travel bucket list and visit the park and the bear sanctuary. 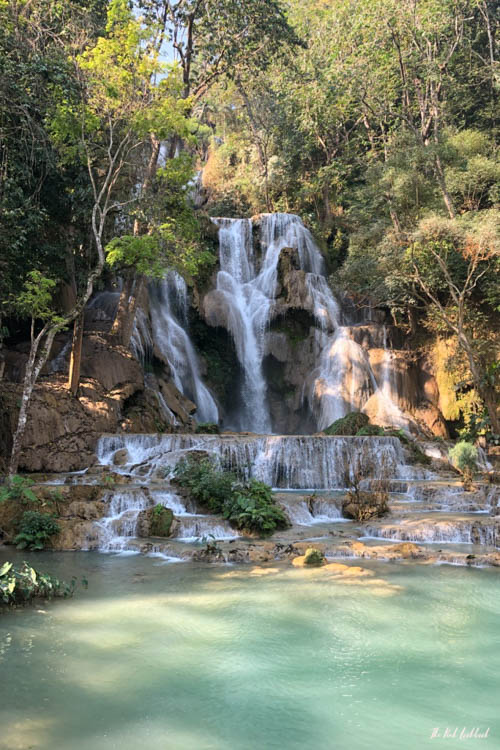 Kuang Si Waterfall is located about 30 kilometres from Luang Prabang’s centre and it takes about an hour to go there. You can either book a tour at your hotel or at one of the agencies in the city centre or you can go on your own. Our hotel had a day tour for USD 60 (about EUR 53). We opted to hire our own driver as we are not really into guided group tours. We just asked the Tuktuk driver who took us back to the hotel the day before if he could drive us to the waterfall. Including a USD 5 tip, we paid USD 30 (about EUR 26.50) for going there and coming back.

The entrance fee for the park is USD 3 (about EUR 2.60) per person. You can pay in USD. However, be prepared to get the change back in Kip, the local currency.

There is no separate fee for the bear reserve. You can donate or buy a T-shirt (USD 8, about EUR 7) or keychains to support the initiative.

The best time to visit is early in the morning – I suggest to leave Luang Prabang between 7.30 am and 8.00 am. The park of the waterfall and the bear reserve open at 8.30 am. If you arrive at this time, you can watch the bears being fed in the morning. Furthermore, most of the groups start arriving at around 10.00 am. Hence, you have plenty of time to explore the place while it is less crowded.

We visited Luang Prabang in February and the mornings were a bit chilly. I wore shorts and a T-shirt and was freezing during the Tuktuk ride. In hindsight, I should have brought a thin jumper and maybe a scarf to cover my legs. Once you walk up to the reserve and the waterfall, it is nice to only wear shorts and a T-shirt.

When you pass the gate, there are two ways to go up. On the left, there is a concrete road leading directly to the main waterfall. Take the smaller path on the right side leading into the forest. After a few metres, you will see the bear sanctuary.

The sanctuary is a rescue centre run by the Australian organisation Free the Bears and the Laos Department of Forestry. Free the Bears was founded by Australian Mary Hutton. Moon bears are hunted, tortured and killed across Asia for their bile from their bladder which is used for traditional medicine. In 1993 Hutton saw a documentary about the horrifying fate of the moon bears. She started a petition for which she got thousands of signatures. Two years later, she founded Free the Bears and her first project was a sanctuary for sun bears in Cambodia. The organisation also operates in India and Vietnam. The sanctuary in Luang Prabang was opened in 2003.

According to Free the Bears, sun bears, moon bears and sloth bears are among the world’s least understood and most endangered species. The organisation aims to raise awareness about the threats to bears: from habitat loss to poaching. Almost all the bears in the sanctuaries were rescued from poachers, exotic pet owners, or people planning to use them in traditional medicine.

After visiting the bear sanctuary, walk along the path up towards the waterfalls. The name “Kuang Si Waterfall” is a bit misleading because it is not only one big waterfall. Along the path there are multiple waterfalls and pools. I enjoyed the pools right below the “main” waterfall most, even though they were smaller. I just really liked the water colours and that they were less crowded. As we started our visit early, there were only a few people when we arrived.

When I did my research before the trip, I thought that probably most of the waterfall pictures had been edited. I could not believe that the water would really be that blue and turquoise. But it really is.

The reason for this intense colour is that the water flows over limestone which has a high calcium carbonate content. When the sun shines on the water flowing over the particles, it turns into these beautiful shades of blue and turquoise.

One couple was brave and jumped into the water. I found it too cold to go for a swim. I was actually a bit surprised how chilly it was in the morning. Probably if you travel later in the year, it is much warmer and nice to jump into the cold pools.

We headed back down at around 10.30 am and it was the perfect time. By then, the first tour groups had made it up to the waterfall and the bridges across the pools got busy with aspiring influencers and the selfie stick crowds. 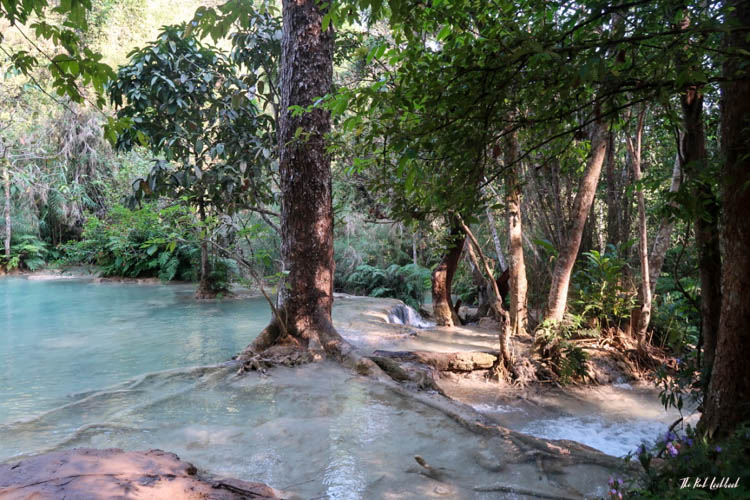 More about Laos and Luang Prabang

A very personal story about kindness during my Laos trip

All information as of the date of publishing/updating. Information about the bear sanctuary is based on the Free the Bears website and about Kuang Si Waterfall on the information provided at the site. We cannot accept responsibility for the correctness or completeness of the data, or for ensuring that it is up to date. All recommendations are based on the personal experience of Elisabeth Steiger, no fees were received.

Corgi in the Garden – Is the Corgi Café in Bangkok Worth Visiting?

Bangkok Off the Beaten Paths – Meet the Lizards in Lumphini Park