Vienna is famous not only for its imperial architecture but also its Fin-de-Siècle style called Jugendstil. One of its most important representatives was architect Otto Wagner who designed the psychiatric hospital in Steinhof, at Baumgartner Höhe in Vienna’s Penzing district. Its jewel is Steinhof Church, a masterpiece of Jugendstil art and a definite must for architecture enthusiasts.

Even though most people only know about the church, the whole area of the psychiatric hospital was built after plans by Jugendstil architect Otto Wagner. Wagner shaped Vienna at the turn of the 19th to the 20th century.

Wagner was heavily involved in urban planning and designed the Stadtbahn – the train which is now part of the metro system (U-Bahn). Its stations are not only tourist attractions but also integrated into the daily life of every Viennese.

Otto Wagner was part of the Secession movement. Founded by artist Gustav Klimt, its mission was to declare war on historicism – the architecture style dominant under the Habsburg Emperor Franz Joseph.

The psychiatric hospital is comprised of 60 pavilions. Some of them are still used according to their original function. There are talks that part of the hospital will soon be home to the George Soros University.

The hospital was designed to offer everything patients needed on site. This involved a newspaper kiosk as well as a hairdresser.

On the way up to the church, visitors pass by the Memorial to the History of Nazi-Medicine. There is also a museum about the atrocities by the National-Socialists at Steinhof. In the Third Reich, a new dimension was added to medicine: the eradication of what was qualified as “inferior human beings”, such as people with physical or psychological handicaps, members of minorities or nonconformists. The Nazis persecuted them, put them in prison or sent them to extermination camps. After Austria’s Anschluss, Steinhof became a centre of the so-called “Tötungsmedizin” (ie. medicine used to kill patients) with mass killings of at least 7,500 patients.

Until the 1980s, the mortal remains of the victims had been used for research. Only in 2002 were they buried in a grave of honour at the Zentralfriedhof (one of Vienna’s main cemeteries). In the same year, the memorial in front of the “Jugendstiltheater” by architect Peter Schwager was erected. It is made of 772 which stand for 772 children and adolescents which were killed between 1940 and 1945 in the national-socialist euthanasia centre in Steinhof.

The church is situated on top of the hill overlooking Vienna. Its golden cupola can already be seen from afar.

Even over 100 years after its opening, artists still come to Steinhof to be inspired by the church dedicated to Saint Leopold. The church itself was built by Otto Wagner between 1903 and 1907.

The mosaics, stained glass windows and some further details were made by Koloman Moser, the angel sculptures by Othmar Schimkowitz and two further statues representing Saint Leopold and Saint Severin by Richard Luksch.

Probably the most interesting fact (apart from the obvious beautiful architecture) is the attention to details. When Wagner started planning the church, he incorporated its function as part of a psychiatric hospital. This consideration of the patients can be seen immediately after entering the church: the holy water is not in a usual bowl, it drips constantly to avoid infections.

Wagner also avoided sharp edges, the priest’s area can be entirely separated from the patients’, access to the pulpit is limited and there are even emergency exits in case a patient needs to be removed fast. Originally, the seating area also considered the needs or types of patients from calm, restless to disturbed (the latter needing more space).

The ceiling depicts the four Evangelists Matthew (man), Mark (lion), Luke (calf) and John (eagle). In addition to the altar, the two big colourful windows are the centres of attention. They show seven saints who fulfil Christ’s commands.

The mosaic behind the main altar stands for the reception of the soul in heaven (the staircase symbolises the soul’s journey).

Several of Wagner’s ideas and designs could never be carried out due to a lack of funds, such as a chapel for Protestant mass or a Jewish synagogue.

Regular tickets for the church are EUR 5 (about USD 5.50). Concessions are available.

Private guided group tours can be booked via otto-wagner-kirche@wienkav.at

Steinhof is accessible by public transport. If you leave from the city centre, there is a direct bus (number 48A (direction: Wien Baumgartner Höhe) until the station “Otto Wagner Spital”.

By car, it takes about 20 to 30 minutes. There is parking in front of the hospital and there is also a parking lot inside.

Note: Use the address “Baumgartner Höhe 1” when you enter it in Google Maps. There is another town called Steinhof in Austria as well and it may be a bit confusing.

Check out another hidden Jugendstil gem in Brunn am Gebirge near Vienna.

Do You Need More Tips for Vienna?

Things to Do in Vienna in Autumn

Lake Neusiedl – The Adriatic Sea of the Viennese

Graz – Hidden Gem in the Region of Styria 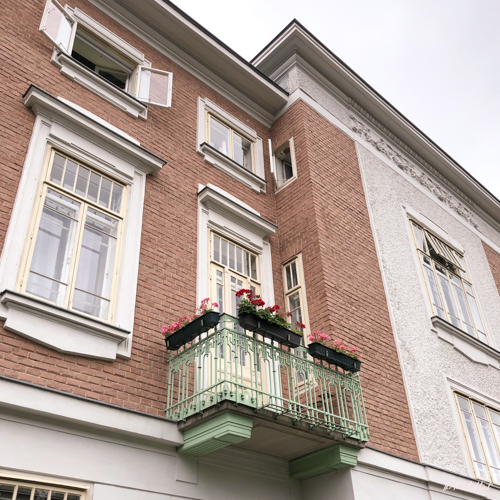 A True Hidden Gem – the Geymuellerschloessel in Vienna